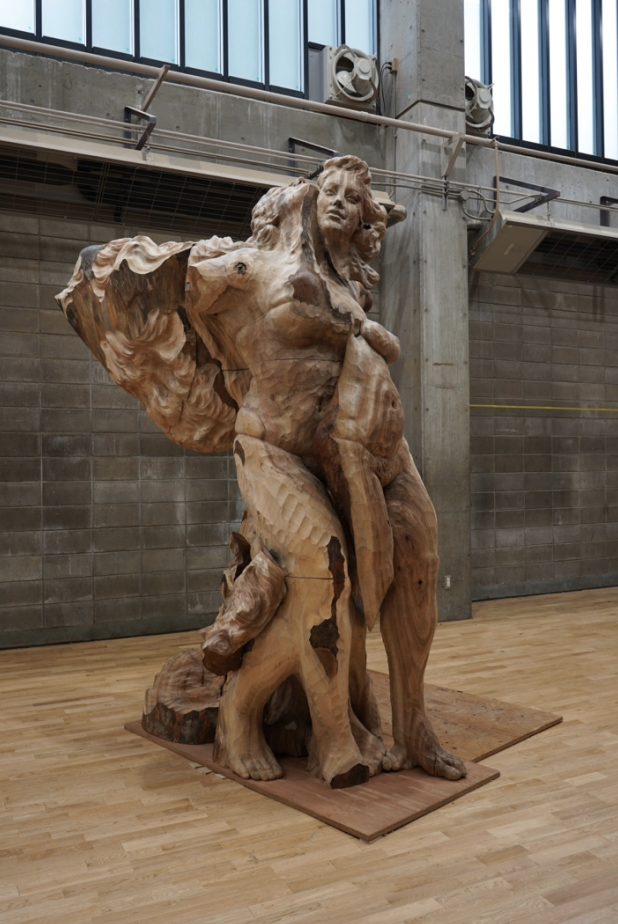 PARCEL is honored to announce the exhibition of new works by Osamu Mori at FRIEZE Seoul in the Asia Focus booth, marking the artist’s second exhibition with PARCEL since his solo show in 2020.

The motifs of Mori’s works are based on an extremely long chronological sequence, varying from American pop icons to medieval classical sculptures, and by navigating across these elements, he questions us about fundamental elements such as “aesthetics ” and our semiotic assumptions and consciousness.

The main work presented in this exhibition approaches 272 cm in height, which is the longest recorded height in the medical record of mankind. According to Mori, “I attempt to express the maximum scale of beauty within the limits of the physical human form,” made possible by the fact that the tree used in the work is nearly 120 years old, which is the record for the oldest human being. Consistent with his other works, Mori carves the human body into the raw organic forms of the trees, countering the beauty of humankind against the strength of the natural form.

Regarding classical sculpture, which is also referenced, Mori explains, “Since ancient times, works depicting the human body have frequently expressed a sense of euphoria and exuberance. Among them, the sense of levitation is a formative beauty that is detached from material heaviness, while simultaneously evoking a sense of euphoria and expansiveness. From the point of view of classical Western works, unstable body positions and airy hair and clothing expressions are consistently staged, capturing the momentary application of gravity as the figure descend from the apex of their flight rather than ascend. The expression of levitation in the East is not affected by air or gravity, but the movement of the garments and surroundings is expressed by a kind of “chi” or aura, and such forms give the viewer a sense of exaltation.

Such a sense of levitation is felt continuously and strongly when descending stairs with great momentum, and both the descent and the timing of gravity are similar to the classical expression of levitation. In thinking about and expressing human aesthetics, I wanted to incorporate euphoria and exuberance as motifs in the real world today.” He said.

In addition to the sense of floating in classical sculpture as seen in “The Nike of Samothrace” and the sense of continuity and weightlessness expressed by Duchamp in “The Nude Descending a Staircase(No2)”, the pin-up girl as a symbol of distorted beauty in contemporary society constitutes the core of the main work. Marilyn Monroe, who is regarded as an icon among them, shows glimpses of the beauty that the public desired, such as bleached hair, a mole, and high heels.

“When we see images of Marilyn Monroe in the 50’s, she is indeed beautiful, but sometimes the Marilyn Monroe cosplays and impersonations that later actors and comedians do seem to fit Monroe’s image better than Marilyn Monroe herself. When regarding to aesthetics, I believe there is a potential for beauty in such caricaturistic events.” Mori says.

In an age where there is no uniform beauty, and diversity is demanded, Mori reexamines, through his works, what “beauty” represents to us, and to whom.