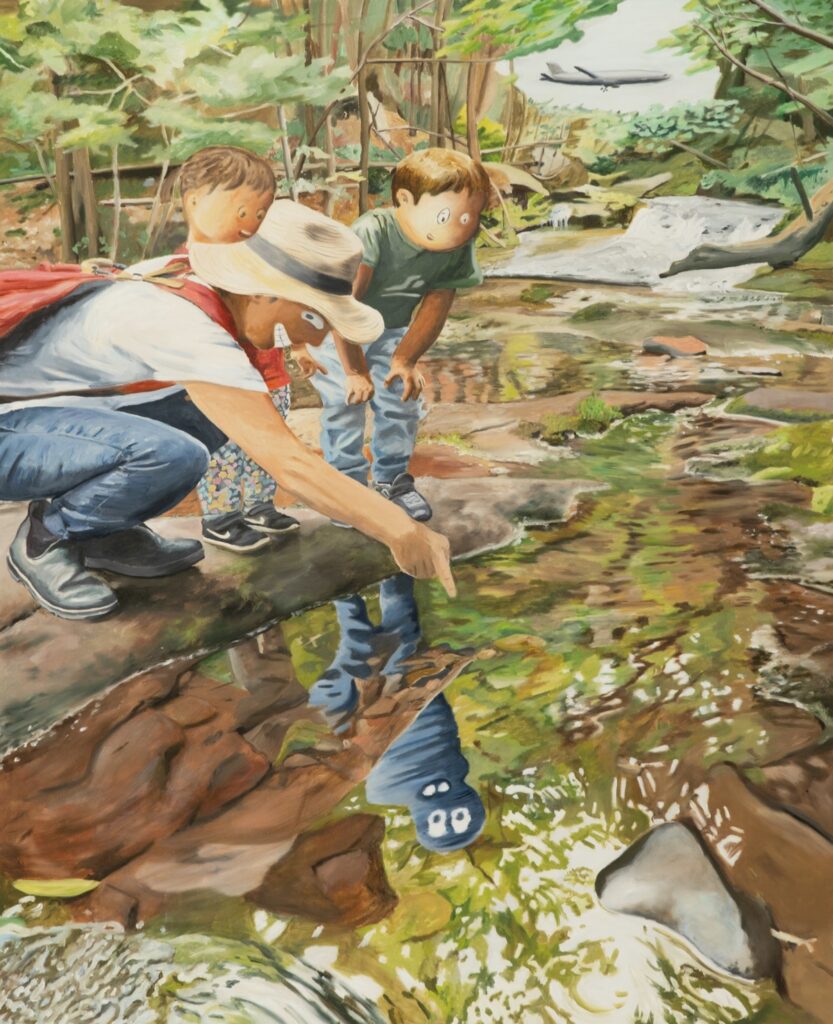 PARCEL is pleased to announce the opening of a group exhibition by six Japanese artists, representing their generations, starting on October 16. This will be an opportunity to show new works in a wide range of styles, from abstract to figurative, as well as one of the largest works by each of the artists.

In 2015, Auto Moai began creating works in monochrome, has been using a lot of color since 2018, and is known for a distinct style in which a highly anonymous “presence” seems to be standing on the canvas. The artist’s style, which is extremely objective but also appears to be a very personal scene, presents us with views and sceneries that can be found through the removal of elements, such as the relationship between people and the relationship between the painting and the viewer.

Born in 1980, Taku Obata is a sculptor known for his series of B-BOY-inspired sculptures based on his roots as a break dancer. More recently, Obata has been exhibiting works on canvas using mainly acrylic paint, reflecting the relationship between modeling and carving in the context of sculpture. By relocating the “scraped” mass from a canvas covered with paint to a different blank canvas and “molding” it, Obata takes a new approach to paintings from a sculptors point of view. The artists has been working on the theme of the movement of the body and mass from his early career, portraying this through various media.

Hiroya Kurata, also born in 1980, currently lives and works in New York. Kurata has created a series of works in the past that were inspired by baseball, both as a pure enjoyment and as a symbol to convey the many messages behind the game. In recent years, the artist has moved away from baseball, and started a series of works focusing on family members. As the COVID pandemic has prevented him from traveling and staying outdoors, his family was what he was closest to, and interacted with every day. Although the works are based on moments that the artist himself actually experienced, they are also vividly depicting the trivial happiness that we, the viewers, feel in our daily lives.

Born in 1993 and currently based in Tokyo, BIEN outlines the shapes of man-made letters, symbols, manga and anime characters with dynamic lines, inheriting and sublimating the various modes of expression of street culture and animation culture, while attempting to deconstruct and reconstruct symbolic meanings. At his solo exhibition at PARCEL in March 2021, he unveiled a series of works in which black lines run inexhaustibly over a combination of panels composed of colored surfaces of light (landscape) captured by a camera, taking on the challenge of a new expression of abstraction on the boundary between fiction and reality.

Koji Yamaguchi is an artist based in Tokyo, Japan since 2018 after working several years in New York. He is known for his oil paintings, which are mainly inspired by the scenery Yamaguchi himself rode passed, while riding his skateboard. The overall blurred look of the screen conveys the sense of speed that Yamaguchi must have experienced. The ambiguously maintained focus of the paintings, which can be referred to as a record of the artist’s behavior, overlaps with common landscapes that give us a sense of déjà vu, making them appear somewhat nostalgic to our eyes.

Kentaro Minoura was born in 1978 and currently lives and works in Tokyo. The accumulation of his own experiences and experiences are mimicked as his mental landscape, and appear on the canvas as a kind of “creature”. The works can be described as a self portrait that reflects Minoura’s own upbringing, where he was introduced to a wide range of cultures, including anime, games, movies, music, and street, without being particularly conscious of the boundaries between them. Minoura uses a wide range of painting materials, from classic oils to spray paint, and the unique combination of these mediums enables him to add depth to his paintings. In recent years, he has been actively producing not only works on canvas but also three-dimensional works on ceramic, expanding the range of his expression.

The exhibition will feature ambitious works on a large scale by six artists who have been actively expanding their activities as an artist. We look forward to seeing you at this exhibition. 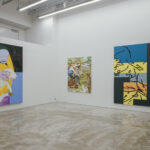 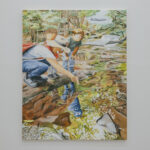 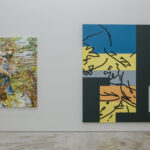 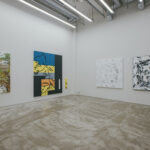 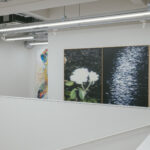 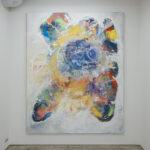 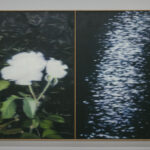 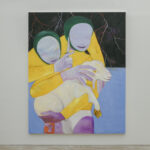 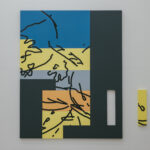 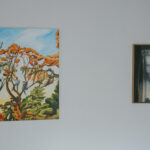 For further information regarding this exhibitions or the artists, artworks please contact us at
contact@parceltokyo.jp

Primarily starting with monochrome art works in 2015, Auto Moai started producing color and canvas works from ’18. Since 2020 the artist has revealed a series of oil paintings and has been working on this ever since. Along with flat surface mediums, she now also works in three-dimensional forms. Recent exhibitions include Buoy (CALM AND PUNK GALLEY, Tokyo) in 2020, How to Talk About Love in a Wrong World (Isetan the Space, Tokyo) in 2021 and (everyday mooonday, Seoul) with Andy Rementer in the spring of 2021.

B-BOY/sculptor, born in Saitama Prefecture in 1980, graduated from Tokyo University of the Arts with a Master’s degree in sculpture in 2008. As a B-BOY himself, Obata explores the relationship between the human body and its garment through wood sculptures, as well as the space the sculpture is situated, movement, and gravity that arise from B-BOY and sculpture. Obata continues to express himself actively through his sculptures, as well as in other mediums. *B-BOY (breakdancer)

Born in 1993, currently based in Tokyo, Japan. BIEN creates abstract paintings and installations based on his unique drawing style, which is influenced by street culture, animation, and figures. He attempts to deconstruct and reconstruct symbolic meanings by tracing and outlining the shapes of human-made letters, symbols, manga and anime characters with dynamic lines, while inheriting the various modes of expression of street culture and animation.

Born in 1982 in Kanagawa, Japan. Yamaguchi is strongly influenced by the flexible perspective of skateboarding, which uses the city as a playground. With the use of various techniques such as painting, drawing, and collage, he applies motifs from ordinary everyday scenes and familiar objects, creating his own distinct perspective. After working in New York for three years from 2015, Yamaguchi has been based in Tokyo since 2018.

Born in 1978 in Shizuoka Prefecture, currently based in Tokyo. Aside from painting, Minoura has been known for his wide range of activities, including designing the CD jacket for a Japanese rock band Ginnan Boyz, co-authoring the book “Myojo” with photographer Kotori Kawashima, as well as publishing “Toriko” , “Hello, Good”, and “Tours”. Minoura has continuously painted since his childhood, both accepting and letting go of diversity in the process. As a result, his current paintings and drawings mimic elements beyond his experience which cannot be further discarded, and emerge on the canvas as some kind of biological creature.